The Twin Otter takes us to Kastelotizzo and back to Bodrum

END_OF_DOCUMENT_TOKEN_TO_BE_REPLACED

During the last year I have developed a maintenance plan for the PCs and their config.

It consists of the following items.

Once a month I execute this steps to keep the backup updated.

And the Airbus Tour continues to some nice airports.

We leave Skiathos fly to Rhodos, Larnaca and back to Samos, with its very interesting approach.

END_OF_DOCUMENT_TOKEN_TO_BE_REPLACED

It became a little quiet about my Mediterranean Tour, because of the mentioned points in the last post.

I have continued now flying on my second Flight Simulator PC, which is running FSX. I flew there some legs with the A319/A320 and A321 to get also a little more experience in the Airbus System Logic. Here are some pictures from my flights. END_OF_DOCUMENT_TOKEN_TO_BE_REPLACED

After a 2 month brake I started all the PCs for a system check and update sequence today. After half an hour the PFD pc went dark. I rebooted the machine and as soon as the windows logo appears it shuts down again. I thought of an HDD first, but it happened on different times. My next guess was one of the USB connected devices. So I unplugged all 8 devices and rebooted, same effect. I took the HDD drive out and installed it on a same spare machine, there all was working. So I decided to switch the machines. During unplugging the graphic card I noticed that the CPU cooler was not fully in place.

So this was my issue as well. The machine overheated and shut down itself. After inspecting the cooler I noticed that the clips on the cooler were broken and therefore the cooler was not tight on the CPU anymore.

I continued with the replacement of the graphic card and USB PCI card and started the machine. All was working again.

So I ordered on eBay some spare parts for the cooler clips to have a backup PC ready again in a few weeks.

It’s been a while since the last post, but there are 3 reasons for that.

First I was one week in Atlanta on a business trip. I flew from Vienna via London to Atlanta. I enjoyed a smooth ride with the Boeing 777-200 from British Airways over the Atlantic ocean. There also this perfect picture was taken. Its really a massive GE90 engine to be watched from the window seat 😉 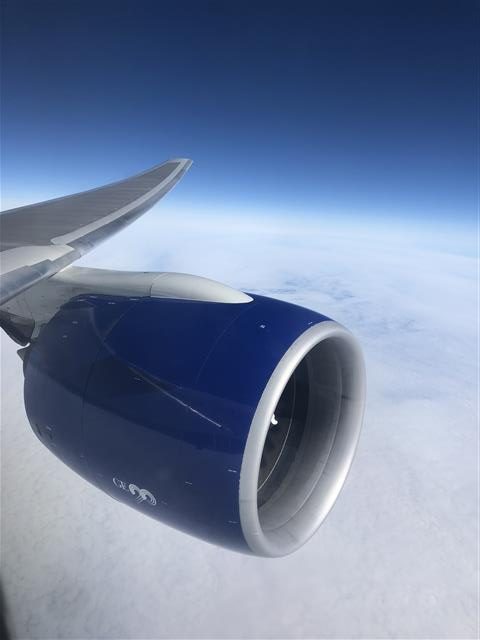 Second, we enjoyed a week of family vacation in Italy.

And third, its hot, very hot in Vienna. For the last 2 weeks we had around 30-35°C each day. Not very refreshing in the non air-conditioned flight deck 😉

Back in 2016 I have started my streaming / capturing setup for some flight. During the month of usage I have changed and adopted a lot.

Since a couple of month I am running a stable configuration in terms of camera angle and the organisation of the picture. Below you can see the actual setup and a short description the 16 different information spots.

I will now explain a little where all the information is coming from.

END_OF_DOCUMENT_TOKEN_TO_BE_REPLACED

Since a couple of years I was running the same design on this blog. The most thing that was bothering me lately, was the limited space for bigger pictures. So I have searched and tried a lot themes. In the end I chose this one, direct from WordPress, the 2015 theme.

Very simple design and I can use larger picture sizes to show you more detail.

I hope you enjoy it. Comments are always appreciated.

Prosim-AR released a new updated version of their software on the 1st January 2018. Prosim737v2. There were a lot of changes in it. First the update model was modified, means that you need an annual subscription to get the latest updates. Same as Navigraph, etc. If you decide not to continue the subscription you can use the software of course.
The migration from v1 to v2 is free for user who already had a v1 licensed.

END_OF_DOCUMENT_TOKEN_TO_BE_REPLACED

I have started my planning for a new route in 2018. Let’s call it “Fly through Europe”.
I will start to fly around in Spain including a “small” jump to Teneriffa and Gran Canaria.

It will be followed by Italy and Greece, but no detailed planning was made.